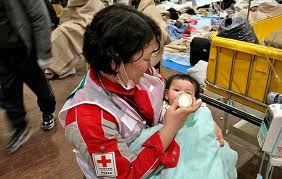 Dennis’s flight took off from Shanghai about twenty minutes after the earthquake hit Japan, just as he was flying over, looking down at the shaking land mass and thinking to himself that it was strange that he was leaning to see the land below, to study the outline and form of Japan, as he’s normally not a window-looker-outer. He didn’t see the country moving. It was my first question, too.

Then he flew home, only slightly ahead of the tsunamis. With a one hundred mph tailwind, he landed one hour ahead of schedule, just as the first waves were hitting Hawaii and just as Little J crawled into my bed and asked, “When is Daddy getting home?”

I was bleary-eyed, having woken up with a start at 5:30 a.m., which is when the tsunami alarms had begun to blare in San Francisco. Unable to go back to sleep and sure that there was something wrong somewhere, I checked CNN, then lay in bed with a breaking heart knowing that the initial death toll of 52 would begin to swell as fast as the waves heading toward the Pacific coast line.

Several hours later, with Dennis safely landed, with Little J and Virgil cuddled up with me, and with my mom on hand with tea and sympathy, we began to thank our lucky stars and send extra love and strength across the ocean.

When Dennis arrived home, I could see in his weary eyes that, while he and his body had arrived, his spirit and energy were still winging their way toward home.

We regaled him with stories of the fun we had while he was away: the long-awaited trip to Chuck E. Cheese, the new shoes and toys, the snuggling and reading with Grandma.

Now that he was back, we would have a weekend of extra cuddling, of sending our thoughts of peace and fortitude to the brave people facing the rising waters and leaking radiation. If smiles and love could help them, Little J would be his own Red Cross. 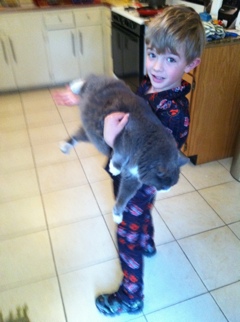 Since we last spoke, we’ve decided to try another trial: Morab-003. I’ll be starting on low doses of Taxol, once per week. In addition, I’ll have 2/3 chance of getting a bio-agent called farletuzumab (farlaTOOzamab). It’s aPhase III trial, lots of ladies with the OC who are getting the combo are doing very well, and it’s happening here in Marin. Lovely. That’s a tri-fecta of joy, as far as chemo goes.

Unfortunately, we have to wait until February 14th to start treatment because they have to make sure my last trial substance is “washed out” of me before starting this trial. The waiting is hard, but both Docs G and C have assured us that it is safe to wait.

In the mean time, we are enjoying the sunshine. Sorry East Coasters, the weather is currently shamelessly Californian in its brazen gorgeousness. Ahhhh.

On a side note, it wasn’t as hard as I thought it was going to be to tell Virgil that we will be starting treatment again. Those of you who know Virgil know that, while he loves any extra amount of snuggle-time that chemo brings, he doesn’t like to see mama unwell. Here’s how he took it: 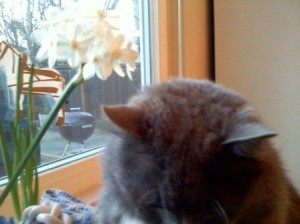 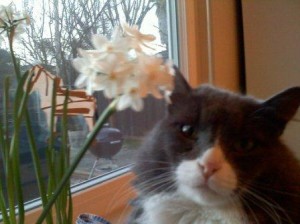 "Listen. Everything's going to be okay. Whatever I can do. Snuggles, purring, whatever."