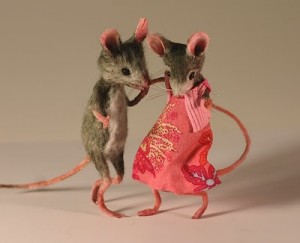 I wanted to update you all on my journey as Mouse #8 in trial codename Stayinremissionforever.

My most recent shot was two Fridays ago. It was injection number three of either:

I arrived at the Cancer Center to find out that my white cell count (taken two days prior) was too low to receive the shot. During chemo treatment, low white cells just means you simply delay treatment a week. But when you’re part of a study, low white cells means you’re kicked out of the program. Just like that. No delays.

I was told I would have my blood redrawn and that there was a good chance the white cells had increased in the previous forty-eight hours. I had a gut feeling that all would be well. But still.

The Doc and her assistants asked me to get dressed and go straight down to the lab. I squeezed back some tears, and then some leaked out. The ladies were sympathetic, which caused more leakage, but I avoided a gusher by repeating my internal gusher-stopping mantra, “Whatever happens, there’s Bravo TV tonight.”

I went downstairs to the lab and had my blood drawn. Then I sent out a few panicked texts and emails, then went across the street for some Pho to calm my nerves. I had an hour to wait for my results. I decided I would defer any freaking out until after I had the results, and only if they were bad. Of course, right? But easier said than done.

I sat in the tiny Pho restaurant which was (honestly) called something like “My Grandfather’s Comfort Food Cafe”. I sympathized with the soggy umbrellas slumped in the corner by the door. The rain sheeted down outside.

After an eternity, I finished my soup and went back to the cancer center. It had only been thirty minutes. I called the coordinator to make sure she had my cell number right. Just in case. She did.

A few minutes later, the coordinator called back to tell me my white cell numbers were good. We were back on. I’d never been so excited to be getting a shot that hurts worse than a bee sting.

I headed upstairs with a huge grin, happily prepared to wait the half hour necessary for the shot substance to THAW and then another half hour for the nurses to observe me after the injection.  All went well. In fact, Doc C actually came up to the infusion room to let me know that, not only were my white cell numbers good, but my immune system seems to be benefiting from the shots.

So now I’m in the middle of a three-week reprieve from all doctor appointments. Then the shots will start again. I’ll be getting them once per month.

For now, we are holiday central here in Sugartown. Our rooms and walls are soaked with the good energy and warmth of guests and visitors. Little J has had nothing but time to play with friends and family. Dennis and I have even gotten dressed up and gone on a few dates (thanks to Debbie and Grandma).

It’s turning out to be a joyous end to an adventure-filled year, friends. I hope you’re ringing in the new one with the ones you love.