There’s been no shortage of love fests this holiday season.

Grandma visited, and there was rollerskating on the driveway-just like it was 1976 in SoCal all over again.

Sugartown had its annual Christmas party. Almost all of the neighbors were in attendance, including the Sugartown gang, who tore through the house making spirits bright. 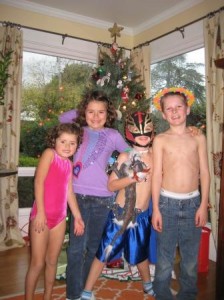 Technically this isn't a pic from the party, but they were all moving too fast for anyone to capture them on film, so I had to use this one from a few days before. Behold the costumes!

And Santa left quite a haul at our house, as we were nice this year. At least we tried to be. As often as we could be. 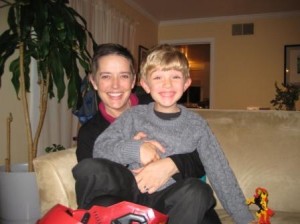 Little J and me engaged in a smiling contest. J's sweater, a gift from grandma, renders the boy impossible-not-to-cuddle.

Later that day, visits by uncles Mike and Tom were icing on the gingerbread house.

But Christmas with the family across the bridge was the most spectacular. Just ask little J, who was smothered with love from his talented and gorgeous cousins. 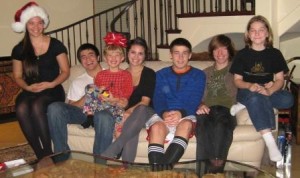 And for those of you who know Little J, you will recognize the following as nothing less than evidence of a true Christmas miracle: 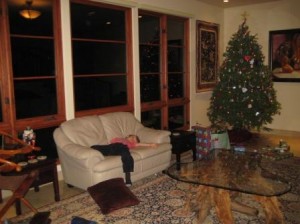 You see, he does poop out. Only once a year, though.

We’ve had so many visits from friends and fun outings (bowling!), as well as quiet time by the fire and good ‘ole playing on the cul-de-sac. I want to capture all the fun and love in a snow globe and save it for later. Give it a good shake right before bed and dream it all over again, whenever I want to.