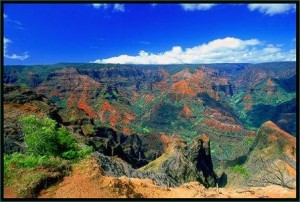 The other day, we went to Waimea Canyon, the immense and lush depression formed by erosion and the collapse of the original crater that formed Kauai millions of years ago.

Three fuchsia leis had been strewn along the lip of the canyon, an offering to the Gods. I wanted to feel a connection to the sacredness of the place, to be inwardly vast enough myself to soak it in.

Little J took off his flip-flops and told us to do the same. “Feel the lava sand, you guys,” he said, closing his eyes. “It’s still warm from the volcano.”  Smiling, Dennis and I took off our shoes, following J’s lead, we stood and tried to feel the energy in the lava sand.

Then the Little One lay down in the red dirt to make a “lava angel.” 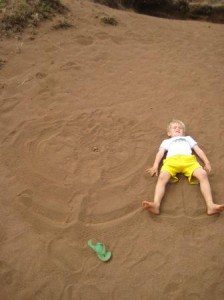 He used the top of his head to make the angel’s face. 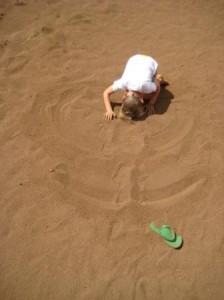 Then added lava rocks for the eyes. A perfect offering.

Before we left, Little J insisted we do a “family bow” at the edge of the canyon. He had us stand in a circle and touch palms in a kind of triple namaste. Then, following his lead, we all bowed our heads slowly.

My fourth trip to this canyon over the last decade or so. My first real experience of it.