Guess who had an amazing weekend.

On Sunday, Dennis took Little J fishing at a stocked lake north of Sugartown. J caught five fish and was beyond proud of himself. 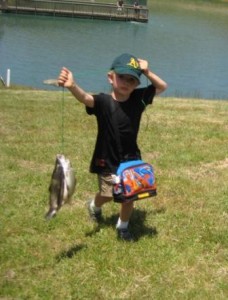 Those cheeks are soo kissable.

I stayed home to rest and read poems by Dan Whyte, a new book Ryan sent which seemed to be written for me, for that exact afternoon.  Not just this/aromatic cup/from which to drink/but the flavor/of a life made whole/and lovely/through the/imagination/seeking its way.

Try as I did to wrap myself in the perfection of the lines, symptoms started to pile up quickly and out of the blue. I couldn’t get out of bed and just gave into the heave of it.

When the boys got home, the burst of excitement from “the catch” revived me. Little J was beyond thrilled and ready to go swimming. D took him to the pool, and they cooled and splashed for hours.

That night, as little J shoveled down pizza, D called the on-call doc. There was just too much turning toward the worst: nosebleeds, swelling belly, etc. We were ordered to the ER. Neighbor Debbie came over in her cloud pajamas (because she is an angel) and held the fort, comforting little J who was so tired from his thrilling day, but still processing that mama had to go to the doctor at night.

Hours and hours went by with blood tests and hydration and x-rays and waiting, and D telling stories of  “the catch” and trying to stay alert and focused on getting home. The news was just that the chemo is really, really taking a toll. Blood Pressure 70/55, platelets 30, etc. etc. And with the swelling and the pain, it’s just about having a cancer that takes over the belly. It’s either the chemo getting in there and working, or something else. We’re going for the former. We were released near midnight and raced home to shower little J’s sleeping cheeks with kisses.

Memorial Day was better, much better. Christina came over with magical Austrian bone soup with marrow dumplings. “This broth is my mother’s medicine.” I sipped it on the back deck while we talked of angels and the wind whirled around us. Then she cut my hair short, like last time. Really short. When she left, I felt so renewed and my spirits lifted.

After a long, peaceful nap, neighbor H invited me for tea in a new little space she created in her backyard. “A little Zen place behind the lemon tree I want to show you.” It was so lovely to just sit out there and sip some Earl Grey and smell the lemon tree flowers while she talked about her garden, her boy’s new teen-ish ways, and the coming summer.

In the evening, D made his famous ribs, and we had neighbor D and her husband T over. Ribs, the trout that J caught, and talk of easier times when D and I traveled to Australia, got engaged, and lived like hopeless romantics. Later, texting with Ms. Miller about love, I realized D and I still live like romantics, but not hopeless. Hopeful. If love is what’s needed for what’s bad to go away, then the three of us: Little J, D, and I are in good shape. In fact, we’re blessed.

Dennis’s mother, who passed away on Memorial Day when D was eighteen, would be so proud of her son, the way he cares for his family, the way his heart is so open. The way he draws such good people into his life. The way his son beams and beams with inner light.

A memorable weekend. Difficult and full of blessings at the same time.