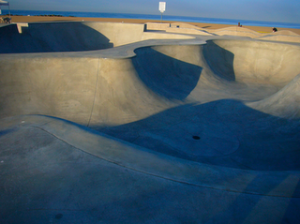 The sun’s out today, which puts a smile on all our faces. Also, the pain and nausea mean that stuff is working. The pain means the ditzels are getting annihilated, and the nausea means the chemo is doing its thing. Thank God D was here to dash out and get the strong nausea drugs so I could eat yesterday.  It was a long and hazy day fueled by saltine nibbles and an “America’s Next Top Model” marathon.

By the afternoon I felt swell enough to watch little J and his friend we call ‘Lil Salty, tear up the driveway on their scooters while I sat and had tea with Salty’s mom.

In the evening, I had an email from my big brother. It said, “You can do this.”

I felt a quickening when I read this. The same sentiment, coming from everyone around me, takes on a certain added umph when I hear it from him. In fact, I feel a few more ditzels perish as I read it again.

When my brother says I can do something, there is a mandate, a no-other-option implied. Like when I was ten and he finally agreed to let me skate with him at the skate park. I was not to embarrass him by wimping out. I stood at the lip of the concrete bowl, my tube socks pulled up to  my knees, my glasses, braces, scraggly hair: embarrassment enough. The concrete slopes rushed up at me.  And off he went, smiling, laughing, tucking his body, and with a little swagger, assuring me it was the easiest thing imaginable. And then I followed. I did it.

Or the time we kicked on our boogie boards way too far out, past the coral barrier, toward the “really big waves” on Oahu. “We’re too far! We have to go back,” I’d yelled, barely audible across whitecaps, salt on my lips.

“The only way in is to ride one. I’ll get this one. You take the next. You can do it.” So I did. There really was no other option.

Or the time we floated in the blazing sun down the American River for hours. Two skinny, tanned teenagers in bathing suits on inner-tubes. Not. A. Care. Floating.

After too long of a while, I realized how far we’d have to walk back in bare feet along the brambly side-water, in the fading sun. In the land before cell phones.

Not to say I wasn’t terrified, hurting, and sometimes a little mad. But I just did it, because he said I could, and because there never was another option, except maybe to sink into a puddle of tears and defeat. Instead, I just pushed on. As a consequence, I felt stronger in myself and trusted him more.

I like to think of this challenge as no different, though he’s not going first to show me how laughably easy it is. I know he would if he could, if not just do the whole thing for me.