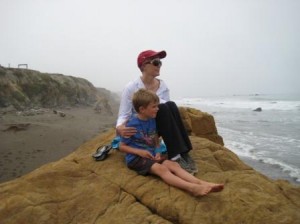 Three years ago today was a day just like this one. The sun shone, warming the places you might want to sit: on the porch, in the cafe window seat.

Auntie Mari and I sat at Peet’s. Your dad had just come back from his long trip to China and Singapore, and we’d had a good, long weekend reunitiing, eating at Finn’s, going to the movies.

But now it was Monday. You were at Miss Sandie’s, in the Orange Room with Gia and Corrina. You were three and probably painting something or glueing something with glitter. You didn’t like to get your hands too dirty or too sticky, though. Or maybe you and Siyamak or Jesse were on the playground, chasing each other until you got too hot in your hoodie that I made you wear, and zip up.

Auntie Mari and I were at Peet’s, like I said, sitting in the window seat, keeping warm. It was a working day. I worked a lot then, maybe too much. But I’d recently lost my contract with McGraw-Hill. The division I consulted for had closed down. After four years of contracting for them, I thought it was the worst thing that could happen to me. But at the same time, I was excited. I thought maybe this was the motivation I needed to try my hand at a different kind of writing, other than educational.

So in the mean time, I’d taken a small job editing some primary school readers for a publishing house in Boston. They’d emailed me tons of files to review before starting the project. I’d printed them out and made a big binder for this job that I would never even get started on.

I sat there, staring blankly at the pages.

“I know, me either,” she said, closing her own notebook and taking my hand. “But everything’s going to be okay.”

I thought about the plan for that evening. Dennis would come home early, and Auntie Mari (Auntie Mawi, as you called her) would watch you while your Daddy and I met with the doctor. He wanted to see us both, after hours. I knew it wasn’t going to be good. I thought he was going to tell me that we couldn’t have a baby. Maybe that, at worst, I had to have a hysterectomy.

Well, he did end up telling us we couldn’t have a baby and that I had to have a hysterectomy, but it got worse. He said I had ovarian cancer, and he didn’t know if I was going to survive.

So I took my glasses off and set them on my lap. I moved the Doctor’s name plate out of the way and just lay my forehead on his desk. I sat just like that and did not want to ever pick up my head again because I could feel your Dad’s hand trembling in mine.

When we got home, you were sitting in your rocking horse, watching TV with Auntie Mari. You called out to me, but I couldn’t even look at you. Daddy picked you up and started getting you ready for bed. Then I did something I’d never done before. I poured two shots of whiskey. I handed one to Mari.

We went into the backyard, and I told her everything.

She cried and hugged me so hard. Then she started to blurt out everything she could do to help. “I’ll finish your project for you and just give you the money. They’ll think you did it. I won’t tell them. I’ll move in with you so I can take care of Little J. I’ll come to every chemo appointment.”

We decided then that I wasn’t going to die. We clinked our glasses to it.

I crumbled into bed that night, unsure how I was going to face you the next day. At three even, you were so wise. I didn’t want you to see my cry. I felt you would look at me and know everything. I knew you’d understand how terrible it was.

But the next morning, we cuddled as normal. We sang daddy Happy Birthday and gave him his presents. He could barely open them. He did it for the sake of keeping us moving forward.

Then I steeled myself to call Grandma and Grandpa. That was the hardest thing I’d ever had to do. Grandma cried and said, “Oh, Jennifer, I just feel like this is a horrible dream.”

I couldn’t call your uncle Geoffrey and tell him myself. I kept picturing him at fifteen, the way he leaned against the pantry and closed his eyes when he got the news his best friend James had died in a car crash. I asked my mom to tell him instead, though part of me wished I’d been strong enough to do it myself.

I told my mom that I was going to be okay, and from that point on, that has been our family’s mantra.

I’m not sure who, maybe Gia or Corrina, told you that I had “stinky stuff in my belly” that the doctors had to get out, and that was the best thing ever, the best way for you to understand what was happening.

And I tried my best to hide all of my pain and fatigue from you. You must have just thought I loved our couch because I didn’t want you to see how I hobbled after the surgery. So I just sat there until the coast was clear.

And when the chemo made all of my hair fall out, I only let you see me in my wig or hats. For five months I hid my bald head. Finally, when it got too hot in the house for a wig, I took it off and showed you my baldness. You smiled and pulled my head to your face and kissed me. “You look beautiful, Mommy,” you said. You still weren’t even four yet.

You’re six now and you’ve forgotten what I looked like before cancer, and probably who I was back then. I’ve had cancer for more than half of your life. Gone are the days that we hide anything from you. Though there is still a part of me that wants to believe you don’t know that cancer is a life-threatening disease, I know you get that.

You led hundreds of people on a silent lap after dark at the Relay for Life last year, and you’ve even told me that you’re going to find a cure one day. Listen, I know you’re my kid and all, but I hope someone beats you to it.

And look at us now, three years later. We’re doing so well. The researchers and doctors I saw in LA on Tuesday are full of hope and excitement about new therapies and drugs in the testing phase and say that there is every reason to remain optimistic.

In these three years, I’ve had a total of fifteen months of remission. The rest of the time, I’ve had some kind of treatment. And you’ve been a trooper, to say the least. I know all Mommies say this, but you’re one of my two main reasons for pushing through each day.

I’m hoping the next three years will be a little bit smoother sailing, but as I always say, I will simply be glad enough to just have them to spend with you and Daddy.

This story is for you to have for keeps. I’m writing this in your journal for when you are older, but I’m also putting it on my blog. I hope you don’t mind that I’ve shared it with some friends.