You are currently browsing the monthly archive for October 2011.

It’s a perfectly cozy Tuesday to still be resting off an exciting weekend.

Dennis and I saw a Michael Beckwith lecture Friday night at the Marin Civic Center. Between him and his amazingly talented wife, Ricky Byers-Beckwith, we were filled with inspiration and energy. And believe me, I needed it after a full-on day at the pumpkin patch with Little J’s class: 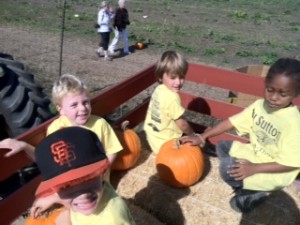 Little Dudes with their Haul 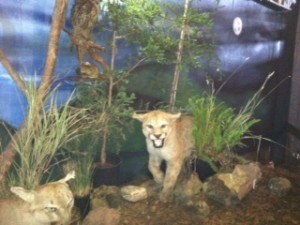 Stuffed Creature in Lifelike Diorama, haunts the barn at the pumpkin patch

The next day, I was all coffee-and-my-robe baking cakes for the school Halloween carnival. Little J’s class had the Cake Walk (best) game. Thank GOODNESS there was a ninja on hand to guard my creations: 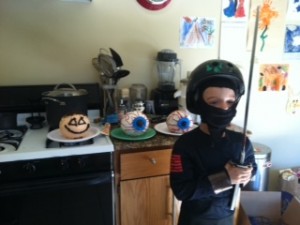 Meanwhile, the boys did an excellent job spookifying the front porch: 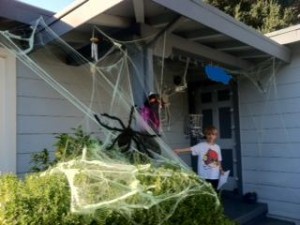 Then it was off to the carney, where the kids turned it out with their costumes this year. Meet Olivia and the Robot: 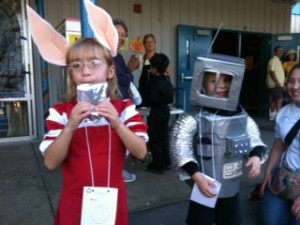 Sunday, I had a brunch for fourteen of my loveliest lovelies. So glad you could make it. We had food and drinks and tried on clothes and shopped and laughed. The last people left at four: 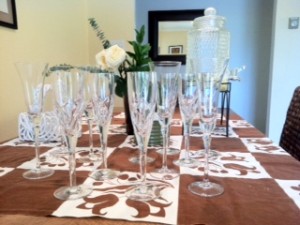 I warned that the pomegranate-champagne would knock your socks off but co-host Julie had so much fun she forgot her shoes!!

The boys were at Limantour beach all the while: 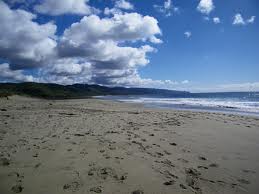 Rumor has it a wave came and stripped Little J of his skivvies. You can imagine the laughter that ensued. Little J expended his last drops of energy telling the story over and over again, with an I’m-still-at-the-beach-shouting-over-the-waves-volume.

Hope you’re having fun gearing up for Halloween and, if you’re in the Bay Area, enjoying the bizarrely summery weather. 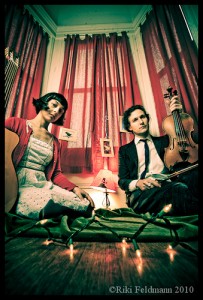 We went out for some music Thursday night in the city. Leigh had set it all up, but as it turned out, she couldn’t go for a sad reason, and we missed her, and we knew how much she would have liked the show. And Ingrid had the idea to buy Leigh a concert t-shirt and Parke toasted her at Nopa, where we all met up for drinks.

When we arrived at The Independent, possibly my new favorite venue, Foxtails Brigade were playing. I loved their sound instantly: soft and pretty, but also plucky and a little weirdly experimental. I felt a little bit like watching a child deep in imaginative play. I could follow along and be charmed by an innocent narrative, and then suddenly be caught off guard by dark and obscure turns and shifts.

The singer, Laura Weinbach is a lovely, talented young woman who plucks and strums at her guitar. She wore a bow, which might seem puerile, and maybe uninterestingly precious. But she is anything but those things. Clearly classically trained in many traditions, Weinbach draws from French, English (Madrigal), and Hungarian singing traditions. Her exciting violinist tore at the air around her head with his bow. A madman with clear purpose.

Dennis bought two CDs. It wasn’t until we were listening to the one that’s mostly Bossa Nova and French songs (A Reverie) that we realized I already owned it. Aunt Eddy had said, “This amazing busker sang French songs and Bossa Nova, and I knew you guys would like it,” and slid the CD across the table to me at Cafe Gratitude. I’d played it endlessly then loaned it to someone…  Their rendition of Dindi inspired a blog post a while back…

When Ms. Avi played, I lost track of time. She with her ukelele, her accent, and her tiny stance, tore the place apart, as much with her huge drum as her huge heart and raspy voice. Speaking of her voice: breathy and floaty over Hawaiian strains, then deep and raspy like Nina Simone, satisfied song after song. She tells us she’s Malaysian then sings about Kierkegaard. She lulls on and on with Polynesian waves of strings and tropics, and slowly the song becomes Pumped up Kicks (better run, better run…)

The whole night, I thought of Leigh. The others did, too. Amazing how, in her absence, Leigh’s presence filled us all with her simple intention that we enjoyed ourselves. I hope that her father’s presence fills her heart forever, the way she filled ours that night.

When Little J sings Eenie, Meenie, Miney, Mo, I’m always surprised by how proud I feel when he gets to the part: My mother says to count to ten… That’s me. I’m the one he’s talking about. I’m mom, telling him to count to ten.

I still remember playing Eenie Meenie on the playground at Pinecrest Elementary, when we still lived in Woodland Hills. Laura Ingalls dress, Dorothy Hamill haircut, Buster Brown shoes and coat. My mother “said to count to ten” back then and it was my dad who “had a donkey” (inkey binkey bonkey).

Some moments I loved so hard that I squeezed them right into the memory keep-sake zone while they were still happening. Do you ever do that? You know that a certain moment is so great while it’s unfolding, taking shape, that you experience a full-fledged nostalgia for it, right while it’s happening?

I felt that this weekend as Uncle Mike showed us his brand new tricked out bike: 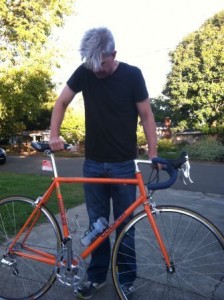 On which he had emblazoned the O’Shaughnessy (Dennis’s mother’s Irish ancestry) family motto: 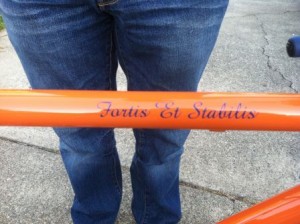 And on Sunday, when we participated in the Bocce Ball tournament to support the local School Fuel: 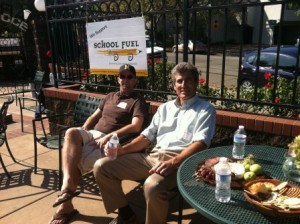 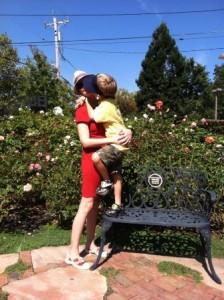 Bocce Boys: The one on the right is Little J. His bff is his twin!

The light in the fall, that crisp something in the air, frames each moment and preserves the little special things we do in a perfect glass memory Mason jar for later. When I go to fetch them from the nostalgia pantry for later,  nothing will have changed.

When I pop that lid, I invite you over to slide down my rainbow into my cellar door…

Sometimes I receive cards, letters and handmade gifts from readers I know. I love every single one of them. In fact, I love anything made by hand.

Last month, I received a gift that made me cry.

Lyndal,  a woman who worked with Dennis back at the turn of the century, sent me a quilt. I’ve met Lyndal only once. I guess eight or so years ago, Dennis and I were out for Friday night dinner and drinks at A’ Cote, our favorite spot in Rockridge. Lyndal and a friend were sitting across from us at the bar. She came over to say hello. And I don’t know what else she said, but I remember laughing so hard that I wanted pick up my drink and purse and grab Dennis by the elbow, and just go sit over with Lyndal. She was hilarious, a kick in the pants.

September was Ovarian Cancer Awareness month. And teal is the OC ribbon color. I don’t know if Lyndal knows that. But she made me a quilt of gorgeous teals and blues and greens and yellows. 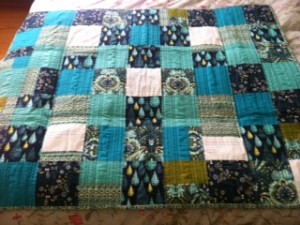 Beautiful, isn’t it? When I first unwrapped it, I was instantly struck by the colors and patterns. Then I noticed a detail from one of my previous posts: 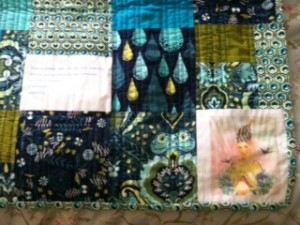 Then I noticed that several of the squares had text on them. I love the incorporation of text in any kind of art. As I looked closer, I noticed the words were mine, from posts on FourSeeds. 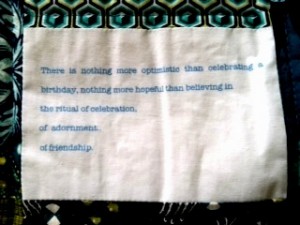 That’s what made me cry, reading little snippets of my own words on a beautifully hand-made gift, made for me by someone I’d only met once. In her sweet card that came with the quilt, Lyndal said the gift was a way for her to express that my “writing reaches far more people than you even know.”

It feels a little boastful to be sharing this with you, but the truth is I found Lyndal’s gesture so touching and artful that I had to share. You see, most of the time, when someone tells me how much they like the blog, I feel pretty embarrassed, as if I somehow don’t know people read it. And yet I do know how many people read it.  And I feel connected to the readers.

So, this is to say that I don’t take that connection for granted one little bit. I am constantly amazed and red-faced about it, like the girl on the quilt.

And thank YOU Lyndal, for making me this precious gift and for sharing your thoughts with me. I hope we see each other again sometime soon.